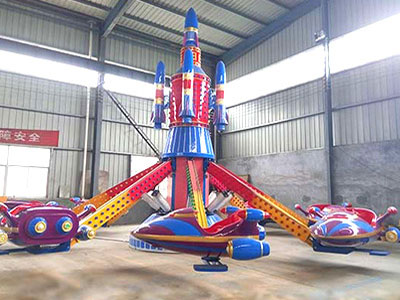 Self-control plane ride also called “UFO chasing” in the amusement rides factory. Self-control plane rides in the amusement park are attractive to kids. Usually, there is a rocket in the middle of the equipment, around which there attached with several cabins. All of each cabins are made of different animals, for example, sheep, bear, duck and so on, but the most common type is the plane cabin, after all, we call this ride “self-control plane rides”. Kids love animals ride. Once press the start button, these cabins will lift by the arms gradually. Additionally, each cabin has its own control system, when flying in the sky, kids could control his own cabin freely. 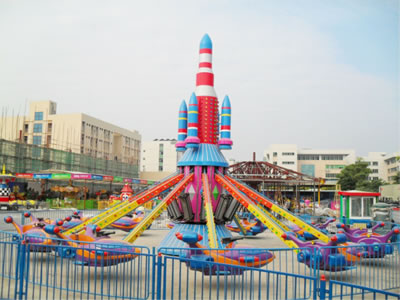 In Beston, we have 6 arms, 8 arms and 12 arms self-control planes rides for kiddie use. Different models are available with these three rides in our factory. Each of cabins could be sit by two kids at the same time. This equipment is easy to control by kids.

♦Brand new design cabins merged with new model self-control plane rides in our factory, colors and sizes of the plane could be designed or take the one we have made before.
♦Each cabin is equipped with an interactive control system, when attacked by the other plane, the cabin will sink automatic, during which realistic sound will be equipped and this gives kids a feeling that they are attending an aircraft war.
♦Interactive design makes the equipment more interesting. When the target was hit by others, the target will rotate rapidly and sink. Speed of the plane rides could be adjusted.
♦Each set of cabin will at attached with a laser gun for kids to shoot other cabins.
♦Different kinds of self-control planes are available in our factory.
♦Colorful led lights and music box makes the equipment more attractive.

We have exported sets of self-control plane rides to many amusement parks in Pakistan, Nigeria, some countries in South Africa, Korea, Russia, Brazil, Jordan, Indonesia and other countries, our rides has got lots of praises from these countries, our customer from these country even introduce us to their friends. As an amusement rides manufacturer, we hope we can make more and more high quality and various amusement rides for our customers.